A Sunrise Worth Waking For!!

Rolling out of bed, barely, at 5.30am we left to attempt sunrise. Steve followed us out and watched us leave on the bike. It was so cold that morning that the bike didn’t want to start, but eventually we all got moving. At the base of the “Watch Tower” we bought some coffee from one of the little stalls and made our way up the small hill.

At the top of the hill there were quite a few tourists and locals alike and of course the usual curio and postcard toting sellers. We huddled around waiting for the sunrise and it was well worth it. First the colors started arriving: 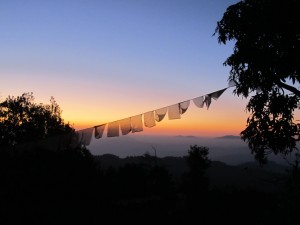 Then the air got colder and the mist started rising: 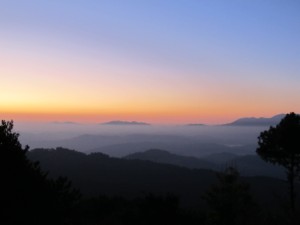 Finally the first mountain outlines became visible and my first glimpse of Everest left me speechless (which is very hard to do):

Everest is the Pointy One 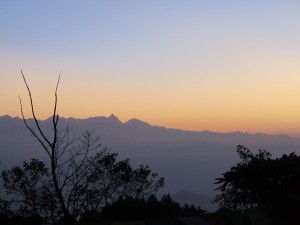 It Doesn’t Look That Big… 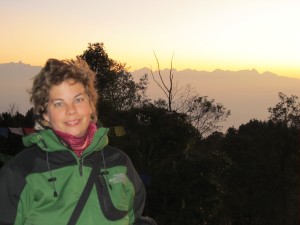 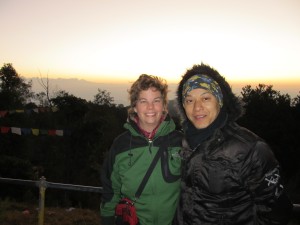 Finally the Langtang Mountain range, “opposite” to the Himalaya range that Everest is part of, became visible. The peaks just seemed to materialize out of nowhere, one minute it was just an early morning haze, and the next there was an entire range.

The Langtang Range Starting to Appear

A Little Clearer By the Second

And then the real show started as the sun crested the horizon. With this also came a blast of cold air as the cool air moved up the valley, it still amazes me that the air gets colder as the sun arrives.

A Sight Worth Waking For

The coming of the sun tinged all the mountains in a stunning pinkish hue. Definitely a great reason to wake up in the morning.

Posted by trailingtrekker on May 24, 2012 in Uncategorized