As you might remember from my previous post, I was quite upset that the promised skype date with Buddha didn’t happen. But at 5.45am I got a text explaining that right as the power and internet came on a fire caused it to go out again. I was so relieved to think he hadn’t stood me up. Its only now I think, “well why didn’t he just text me last night to say that??”. Often when you are hoping that new feelings are being discovered you fail to notice the start of red dots that ultimately come together to be a giant red flag…

Cathleen and I had a big day planned, we were heading to the old city of Dresden, reputed to be one of the prettiest in the area. Through the rideshare site, Cathleen had managed to join a girl with a “group” ticket on the train. Normally it would cost 20+ euros for a ticket one way to Dresden, crazy expensive. But the group ticket allows 5 people to go for the cost of 25euros (5 euros each). The other 2 were twins both studying law.

Dresden lived up to everything I was told about it, absolutely stunning with tons of old buildings and wonderful Christmas markets and when the sun came out, stunning weather too. 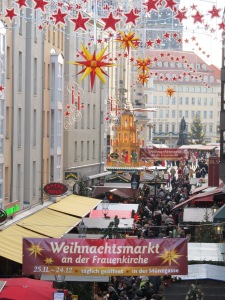 We stopped in at the Tourist Information center, picked up a map and were off exploring. A truly great day, but even though the sun was out it was still pretty cold. 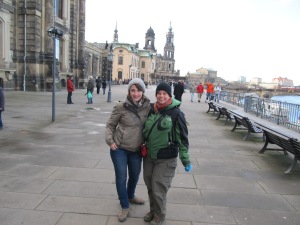 For lunch we stopped at one of the markets and got our usual bratwurst. Berlin is still top of the list as far as taste, but this one was delicious regardless. Just when we thought our fingers were numb from the cold we found a cute little coffee house and got some tea and hot chocolate. The best part was that the sun came streaming in the window and warmed us up along with the hot drinks. We enjoyed our time with Cathleen reading a book and me working on my diary, content in each others company.

Heading out to continue our explorations we went through yet another market and found the gluwein stand. Of course we had to visit almost every stand before I decided on a mug. The first stand had a mug in the shape of a boot that was my first choice but then trying to clean it would have been a chore, so I opted for a nice blue one. 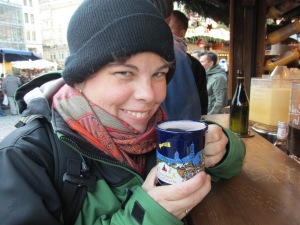 IT turned out that Dresden had a “Health Museum”, it sounded interesting and well, the selling factor was that it was free today. As we walked towards it we walked over some dropped fruit, as we took our first steps I noticed the leaves and as the reek of the squashed fruit reached my nose I realised it was gingko fruit. It might be good for the brain but it smells horrendous. This was followed by quick side stepping and trying to rinse shoes in puddles.

The museum turned out to be super interesting, with lots of interactive displays all about the human body. The most amusing part to go through was the Human Sexuality section, which seemed to be getting a lot of repeat visitors from the boys of the high school group just ahead of us. Unfortunately, it was mostly in German and I was feeling to tired that I zipped through it and went to go sit and relax.

In excellent fashion, Cathleen had found us a rideshare home for 5 euros. On the way back Cathleen introduced me to the Doner Kebab shop, famous for its huge sandwiches. It was amazing, but impossible to finish, at least on my part. 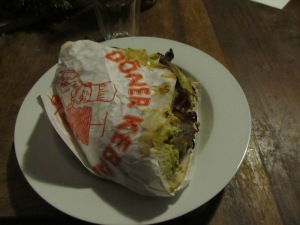 A great end to another great set of explorations!

Posted by trailingtrekker on August 7, 2012 in Germany, RTW, Travel, Uncategorized