Christmas last year was on the MSC Divina in the Caribbean. Our stop was in San Juan, Puerto Rico, and it was a stunning day, hot and humid… a reminder of Christmases back home in South Africa… and honestly I was miserable, missing my family terribly. Lots of friends, yes, but sometimes it just doesn’t feel the same.

This year, sailing in the Mediterranean on the MSC Fantasia, I was determined not to let myself get down and with the start of the Christmas cruise I donned my antlers and jingled, much to the amusement of guests and crew alike.

The guests got so used to me wearing them that they would use them as a point of reference in a crowd or request me at reception as the “short one with antlers”. The more I made others smile the happier I felt. Of course there were the usual grinches, rolling their eyes, making silly mooing noises (idiots don’t they know it’s a reindeer), making snide comments about how that symbolizes cheating on your boyfriend in Italy. But I discovered the majority loved it so much that these comments made me wear them even more, and walk a little taller!

I wore them in Rhodes, Greece 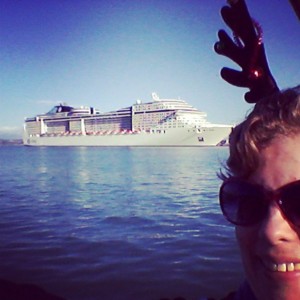 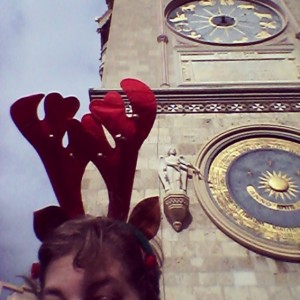 And on Christmas day in Messina, Sicily

Christmas Eve found us in Valletta, Malta, one of my all time favorite ports. I was able to go out for a good four hours and just wonder around to my hearts content, taking photos and exploring. The atmosphere was amazing, decorations everywhere and even the military band through the main street.

I went down a bunch of smaller streets, exploring by myself and picking up things like Christmas stockings and crackers!!!!

Then stopped for lunch and had a wonderful hot bowl of potato and zucchini soup with lots of parmesan cheese (this addition would later come back to haunt me….)

Back on board we had fun taking photos with friends and then prepared for the Christmas Choir. 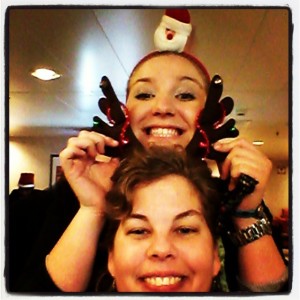 Our fabulous Cruise Director, Franco, had a great idea for a Christmas Choir. On Divina we only had a few of us from Entertainment singing around the piano in reception and guests singing along. Franco had grander ideas and he wanted the guests to be the choir. We had 2 practice sessions which went off reasonably well. Our biggest obstacle was the last line of Jingle Bells “In a one horse op-en sleighhhhhhh“, the timing was a bit tricky. Last night, Christmas Eve, we waited in reception hoping all 200 odd guests would show up… Not only did they show up, they COMPLETELY filled reception, the stairs and all 3 floors that overlook the reception area. We have guests from all walks of life, from Italy, Germany, France, England, South Africa, USA, Russia, Ukraine, Turkey and just about every country in between.

Words can not explain the energy as we all sang and smiled and laughed. For those 15minutes it felt as if the world truly was at peace and happy. Amazing what the power of song can do!
(Hopefully I can add a video later, just have to find one)

Christmas in the Staff Mess

We were pleasantly surprised upon entering the staff mess to discover champagne and wine, TWO kinds of cakes AND icecream, and a couple of extra choices for dinner. It really added to the atmosphere and everyone was thrilled to have something special… that is until we realised that a bunch of officers decided to have their extra special dinner of large prawns and bakes fish (most likely supplied by one them) just one table away, as it was “easier” to use the large tables in the Staff mess versus sitting in the officers mess. So, even though we had some good choices, the aromas coming from their food kind of overshadowed everything, thank heavens we had icecream!!!!

Christmas Day found us in Messina, Sicily. As much as I love Sicily and it’s little towns like Taormina and Erice, Messina is very dull in comparison. On good days, like a normal work day, there is hardly anything open, with most places only starting lunch or any sort of food after 12pm. Since we are only in Messina from 8am to 1pm, there is not much chance to have time for food or anything.
The one thing Messina does have is a spectacular Cathedral and on this day we were privileged enough to enjoy part of the Christmas mass.

Once back on the ship we had a chance to sing in the choir once more, this time for Santa himself, who had taken a break after delivering all the presents the night before to visit with us and hand out some gifts to the children on the ship. 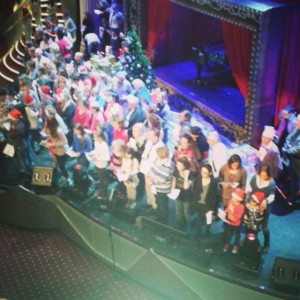 And so Christmas came to an end, and, despite missing my family terribly (ok in truth it was really the roast beef, yorkshire pudding, green beans and gravy that I missed, but they come with it), it turned out to be a rather good Christmas, with lots of friends and happy guests. Who knows where Santa will find me next year, but I hope it’s with more amazing people like this one!!

Posted by trailingtrekker on December 26, 2014 in Cruise, Cruise Ship, Travel