During our crossing last year in November from Europe we stopped off in Panama. It was a gloriously cloudy muggy day with humidity bordering on 99% and the temperature hovering around 40C/104F, give or take a degree or two. 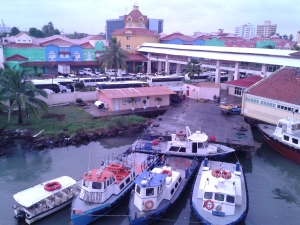 The sunrise over the port was quite stunning…

I had drawn the Panama City Tour exursion, around 6hrs of exploring and a chance to see some of the locks of the canal for which Panama is so famous for.

Panama City is a place of divergence, from the Old City to the New City to the Ruined City of Panama Viejo….vast differences from a central point.

Our first stop was the old capital of the country and part of the Old City, located in the suburbs of the Modern New City, it is a World Heritage Site. 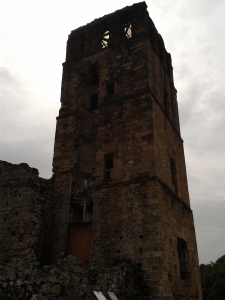 A settlement was founded here on the 19th August 1519, making it the first permanent European settlement on the Pacific Ocean.

Now you can see the New City on the skyline….

After exploring some of it’s history we headed through Panama City’s modern quarter, with it’s stunning architecture.

Some that defies imagination…

Making our way to the Old City we walked the streets and enjoyed a market, listened to a bugler under and umbrella and marvelled at the old colonial architecture. 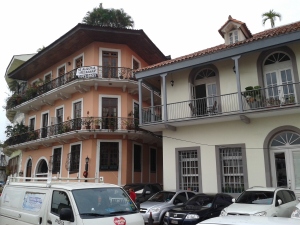 The driver almost forgot to take us to the canal and the locks, truly the highlight that everyone had been waiting for. Most of us were feeling hte heat and humidity and more than a few of the guests were getting grumpy and agitated, so I was much relieved when we changed direction and headed for the locks.

It was a sight to behold, truly a marvel of modern engineering, even being 100yrs old. I only wished my dad (an electrical engineer) could be there with me. We were also lucky enough to have a Korean Cargo ship proceeding through the locks right as we arrived.

After filling with water to even out the level the first lock opens to accept the cargo ship, which just barely squeezes through. 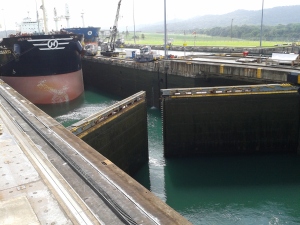 The “mules” that pull the ships through 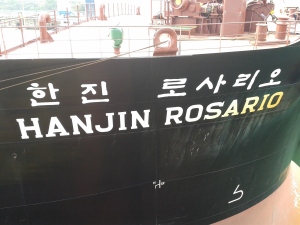 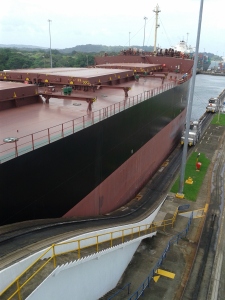 I wonder how many times they scratch the paint work….

All in all a fantastic opportunity to explore part of a country that always seemed slightly mysterious to me, I always imagined the canal with small cities along the edge… but discovered a complex place with stunning buildings and a rich history… just wish I had bought a hat! 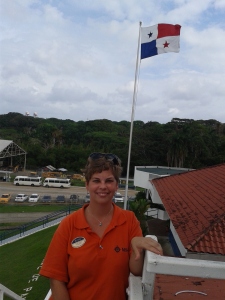 Posted by trailingtrekker on August 14, 2014 in Cruise, Cruise Ship, Travel