Island Life – Tales of Everyday and not so Everyday Happenings!

One of the things I loved about my little bungalow was the forest like garden that brought in tons of wildlife. From birds, to reptiles to mammals. I tried my best to capture them in photos. The one I never managed to catch was the little grey squirrel that would bound past my porch around 5pm every evening. It would run along the roof, over to the coconut palm, up to the telephone line and over to another palm and off into the trees. It was a definite highlight of the day. 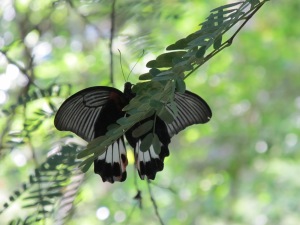 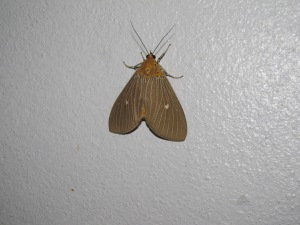 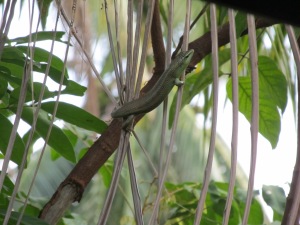 A Bird of Paradise

Some were not so welcome. After finding this fella in my toilet I became fanatical about checking it every time I needed to go… 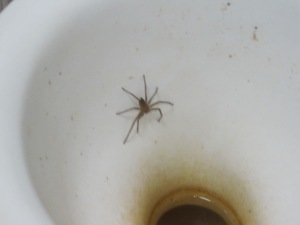 Not So Welcome A Visitor

Every November (usually) Thailand celebrates Loi Krathong. It is also commonly known as the lantern festival. Loi means “float” and Krathong refers to a usually lotus shaped container. Participants release floats with candles into the ocean (these are often intricately made of banana stalks and leaves, coconuts or bread). Polystyrene has been used in the past but since it isn’t biodegradable it is frowned on. It is a time to release your float and watch troubles of the past float away and then light a paper lantern and watch your hopes for the future float to the heavens.

(You had to add a few coins, a piece of your hair and some nail clippings to ensure your message was sent) 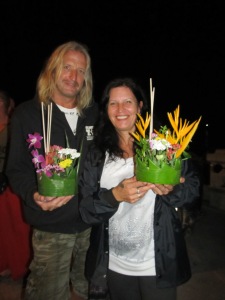 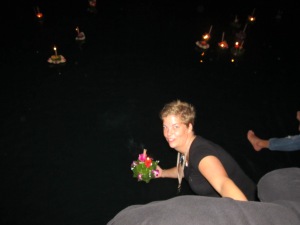 John Helping me with my Lantern

After all that happened in 2012, it was a festival that meant a lot more to me than it normally would have.

Watching all my future hopes rising

After my fabulous surfers Stephanie, from France and Willy and Daniel from Austria, I thought I had hit a run of fabulous people. Then I hosted an American who was coming to do his Advanced. He had contacted me to ask diving advice and had hinted at finding a host. I happily said I could host him for a couple of days. He said great I show up in the morning…ummmm ok! He called at 6am to say he was on the island!! This was not a good start. He then proceeded to take over my porch and never seemed to move from the chair there. He was trying to reach a dive shop in Malaysia to get a certificate but didn’t have a phone that worked, so I suggested he add money to his skype and use that to call. Turns out his credit card didn’t work. So I offered mine, he made the call and even when my mom was trying to message me on skype during his conversation he just kept talking and talking. He never even offered to pay me back (luckily it was only a $1.50). At one point when I got home from diving he mentioned in an off hand manner that he had tried to use my skype again but there was a password… ummm I didn’t give him permission to use my laptop… About 5 days later, after I had another surfer arrive, I made it clear that I could not host him any longer! It really does annoy me when people take couchsurfing for granted. 9 times out of 10 a surfer will offer to buy dinner, replace the milk or at the very least buy a beer. This guy did none of that and drank a bunch of my bottled water. Oi!!!!

The next surfer to come was from Chile. He was a reasonably good guy and I felt bad that I was in no mood for moochers after the previous surfer. I sort of put out ground rules, which is not something I normally do. He also wanted me to spend time with him and explore the island, but a few dinners were all I could manage as I was very busy with the end of my Divemaster course and volunteering. He stayed 3 nights and then moved on. Later I found out he had decided to stay on the island and helped Ricardo, my instructor, with his band and booking them gigs. Ricardo also roped him into being my victim… I mean patient for my rescue scenario. Let’s just say he was a wee bit bigger than me and I nearly drowned both of us trying to get him to shallow water. But the important thing is… That I didn’t! 🙂

I would have not hosted anymore after this but had already agreed to rather hippy looking couple from Ireland. They were here for the full moon party and so I only offered to host them the first night. I have seen what some full moon revelers devolve into and I didn’t want to have to deal with it. When Selina and Chris rocked up in the pouring rain I liked them immediately. It’s funny how sometimes people just click. They were laid back and relaxed and insisted I come with them to the full moon. I was actually tempted and if fate hadn’t plotted against us as far as planning I most likely would have. They ended up staying with me a few days later and recovering from the full moon, and for Chris, from food poisoning. I truly missed them when they left and hope for the full Dublin tour sometime in the future.

All you can eat Greek night with Selina and Chris