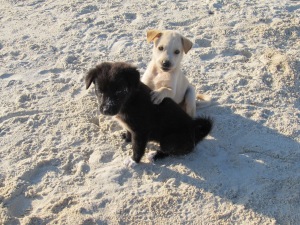 Around the beginning of December I was having breakfast at my usual spot and noticed a tourist walk on the beach and get mobbed by puppies!!! Well this needed closer investigation. So climbing down the restaurant ladder to the beach (I love being able to write that) I walked on over. Instantly I was mobbed. There were 7 puppies if I remember correctly and they were solid balls of fluff that lived under the deck of another restaurant. I had a flash back to a week before when, while having breakfast with Simone** at the French Bakery, I had heard some yelping. I discovered a few teeny tiny pups seemingly lost and not finding their mother. I picked one up and carried it out of the road just as the mum trotted up. I had not thought of them till this morning. 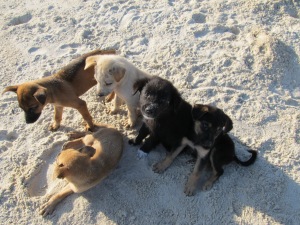 They had grown to be even cuter and it appeared well looked over. While I played with them, and decided on my favorite, the owner came out and proudly looked on. She was feeding them well and truly seemed to care. However, it did cross my mind that if the mum dog could produce this many pups at one time Chaloklum may soon be overrun. I just hoped she might consider spaying her soon. I let PAC know so that they could look into it. 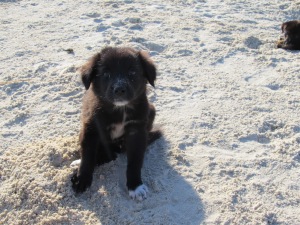 Favorite that I think I would have named BEAR

Visiting the pups became part of my morning routine, when I didn’t dive and I loved every minute of it. They would see me coming and run down the beach towards me for attention. Then again I shouldn’t feel special as they ran down the beach towards everyone, including seagulls and crabs. After a week or so I noticed my favorite had disappeared and feared the worst. Later, while chatting with Laura at PAC about them, she told me that someone had brought in a very fluffy black pup with white paw that they had found “lonely and homeless” on Chaloklum beach. It had to me my little Bear, at least she found a home, but am pretty certain the person made up the part about finding a lonesome pup wandering the beach, as they never parted company from the pack.

At my farewell dinner in mid December the pups had got older and also discovered they could climb up to Genny’s Italian restuarant and beg. One little guy was very persistent and only happy with us and preferably on a lap, namely mine. 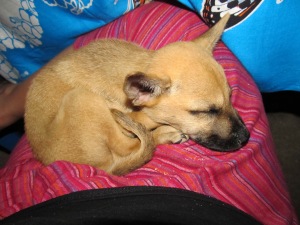 I hope they will all find homes this year!

There are 2 dogs that live around the bungalows, Blackie and Brownie. They come around every now and then and usually make themselves at home. We have also been told to make sure the little porch gate is closed at night as they have learnt to open the fridge that is located in the outside kitchen. Luckily I never had any issues like that. 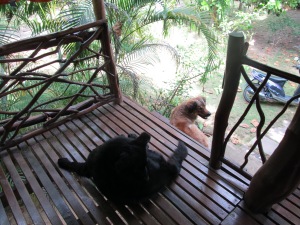 One day while I was eating some left over pizza Blackie came over to see what was on offer for snacks. Usually I try not to give them anything as I don’t want to encourage begging too much. But on this occasion I just couldn’t finish the piece of pizza and hated to see it go to waste (it had already been in the fridge 2 days and I had no microwave to freshen it). So I grandly placed it in front of him. He looked at me and looked at the pizza… Then looked at me as if I was completely bonkers for offering him something so unappetizing. So with no other recourse I tossed it into the trash. It had barely hit the top of the pile when Blackie enthusiastically got up and grabbed it. Obviously it is more appetizing out of the garbage, after finishing it he brought Brownie over to get some (oops all gone)… got to love island dogs. 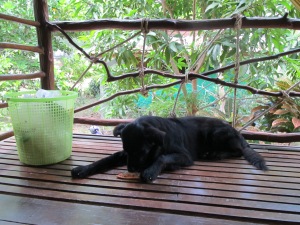 Monsoon it be a coming

The Monsoon season in Southern Thailand does not follow the same timing as the North, often catching travelers off guard. On Koh Phangan it runs between October and December, but so far we had only had a day here and there. But finally it arrived, en force. Almost 10 days of solid rain…everything was super saturated! After that you could time the mosquito incubation period almost to the minute as wave after wave hit us in swarms. 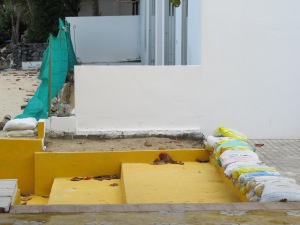 Preparing for the rains 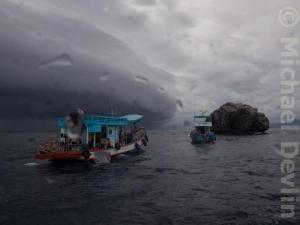 The storm moving in at Sail Rock 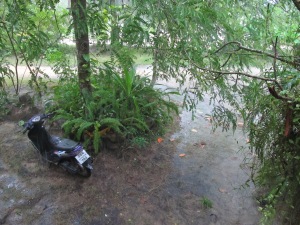 Almost had to swim my bike back to the bungalow 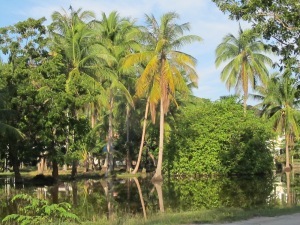