Laos has long been one of those mysterious countries I never thought I would get a chance to visit. Even though I hoped to during my stay on the island in Thailand for some reason it hadn’t occurred to me to leave the island early and visit this stunning country until a friend said “Well why don’t you??” (Thanks Monique). It had been quite a few years since I had gone off exploring alone to a completely foreign country and, although I was nervous, as soon as I found a guide book I was hooked and so the Laos plan developed.

The bittersweet truth of leaving to explore is the farewells that need to be said. I have made amazing friends on our little island of Koh Phangan, but since it’s magic seems to draw us back I am sure I will be seeing you all soon…ish! For now it’s off to another adventure, LAOS!!

Researching the best way to get there from Bangkok was a little intense, there were flights (quite expensive), busses (over 12hrs or more), trains (with a sleeper bed at least) and so on… I had planned to take the train to Nong Khai, just below the Laos border in Thailand, then take a shuttle to the border, go through immigration, take a shuttle to the capital Vientiane, spend the night and then take a 13hr bus journey to Luang Prabang, my planned destination. Total cost would run around $120 US, total time 2.5 to 3 days.

This would leave me a total of 3 days in Luang Prabang with 6 days ish of travel. The travel agent suggested flying and spending a full week in the town. I agreed and we found a ticket for $279 US, double the price but also double the time.

I am so happy I opted for flying!!!

Arriving and getting through immigration was a lot easier than expected, for US citizens it is $35 or 1450baht. I had been told that I had to take new crisp US$ notes or they wouldn’t be accepted, but it turns out they take pretty much anything with a conversion rate. Just be sure you have a passport photo. If not they will charge an extra $1 to take a photo of the passport.

It’s Sunday of Course the Money Exchanges are CLOSED!!!

At Bangkok airport I stopped at 2 or 3 money exchanges to see if I could get Laos Kip, apparently none of them carry it, but no problem right? I can exchange at the International Airport of Luang Prabang, Laos…. right? WRONG!!!!

Once through I went out to exchange money and find a taxi. What do you know??? Arriving on Sunday meant all the exchange offices were closed, what are the odds! Luckily the taxi guy in charge of taxi payments exchanged some money for me, he seemed to be trying to do it quietly and gave me a rate of 8,000kip to $1, so I was pretty certain he was getting a good deal. As it turned out he gave me the same exchange rate as everywhere else, most country’s the guy would have been sure to give a terrible rate as we had no other choice. It cost 50,000kip ($6) to get into town per taxi, so find people and go in a group, I had met a French couple from the Comoros Islands on the plane and so we were able to split it 3 ways.

For the first time ever I had not booked a hostel or a guesthouse or anything, I figured I would try practice what I preach, in the sense of “don’t worry, all will work itself out”, plus since I only had my day pack with me it meant I wasn’t lugging all my stuff through town with me….

The French couple had the name of a guesthouse and the taxi driver dropped us off and pointed in that general direction. We were a bit confused as we didn’t see it until I looked up at a building that was definitely not in use! Yup the guesthouse had been closed for 2 yrs… how funny is that.

We went to the one next door but the rooms were too expensive, they had one room for 120,000kip ($15) and the French couple were thinking of taking it. I sighed and said I would keep looking and the clerk said maybe he could give me a discount on the $25 rooms upstairs and make it the same price. It looked great so I agreed (more than I wanted to spend but it was the first night)… then the couple wanted to get the same kind of room at the cheaper price (they claimed the cheaper room smelled funny)… wow! there are 2 of them and 1 of me…. in the end the clerk called the boss and he said no to discounted rooms, so we moved on.

We found a place offering a room for 60,000kip ($6), but they only had 1, so the couple said they were going back to take the cheaper room at the first place (even if it smelled funny)… these people were starting to crack me up. The room I looked at was not all that good so I kept walking. Suddenly I cam across the French couple again talking to a guy on a scooter about a place down the road for 100,000kip ($12). The conversation went something like this:

In the end I found this great little place just down the road, 80,000kip ($10), free tea and coffee, wifi (when it is working) and it is in a room with 2 beds so when my new friend from Bangkok arrives it will be perfect! What an adventure!

I went to the night market to find something to eat and am pretty certain I squealed with delight at the sight. Everything was so well organized and beautiful and when I got to the food section there was so much to choose from I didn’t know what to take, I ended up eating a sausage on a stick and buying a fruit shake… just too much to take in!! 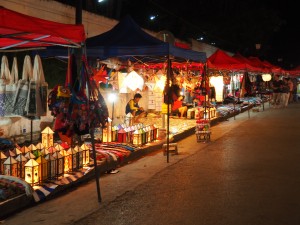 I was loving Laos already!!!!

Posted by trailingtrekker on November 19, 2015 in Thailand, Travel