For as long as I can remember the ocean, and it’s creatures have fascinated me, and I have had a love of Dolphins and Whales. A year ago I got to scuba dive with whale sharks, marking a tick on my bucket list. Just a few days ago, through a crazy coincidence, I was able to go swimming with dolphins, marking yet another tick off.

How it All Began…

Part of my duties as an English Social Hostess on board Divina, is to take visitors, usually dignitaries and officials, around the ship on a ship tour. I met all range of interesting people, but I must say, the group from Falmouth, Jamaica were by far the most animated, fun-loving group of officials I have yet met. In fact I got 2 marriage proposals (including one of them getting down to one knee). They insisted I join them for lunch in the ship restaurant after the tour, (after I got permission), and we had a great chat. One of the officials, William Tatham of the Port Authorities (if I remember correctly) gave me his card and said next time we were in port he would organize something for me.

Well, my mom always said I have no shame when it comes to taking people up on their offers, and so two weeks later when we were due to arrive I dropped him a message. Next minute, I get an email from Dolphin Cove inviting me to experience a VIP tour and dolphin swim at no charge!!!! I couldn’t believe it, wow!

Unfortunately, that port we had a crew drill and we got out too late to go, same for the next visit, I also had an excursion that time (the Jamaican Bobsled… where I feared for my life, but that’s another story).

It really looked as if we would never get a chance to take them up on their offer, until….

On our 3rd time back in Falmouth it was Jam Cruise. Not only did most of us have it free, there were also excursions. This was the perfect time. Dolphin Cove suggested I bring friends, the more the merrier, and so our merry group of 20 were all busting at the seams for the day to arrive.

….then, Murphy’s Law… I was scheduled to work, which meant, unless there was a miracle, I would miss the trip. But I decided not to complain, not to argue, after all it is my job. Instead, I think everyone else went to my defense, and with 30min before the bus was due to leave I was told I could go!!! Woohoo!!!

17 of us made it on the bus, and with our amazing driver, Derek, we set off on the hour long drive to Dolphin Cove. Derek, gave us historical and musical information the whole way down, and everything was, well, “Eiri Mon, just Eiri!” 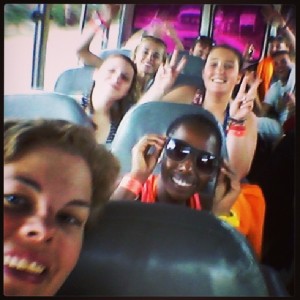 Our dolphin was named, Shakira, the other half of our group had Apollo. Shakira, was beautiful and I do not have words to express, how amazing it was to touch her and swim with her and even kiss her. In fact, I almost started crying the first time we got to stroke her as she swam past (oddly, she feels very much like the rubber toys they sell in stores…)

After we got to meet and touch her it was time to swim with her. Here we had to tap the water and then she would pop up in front of us, lie on her back, we would grab her flippers and then she would swim us back to the pier. Very important was to let go when the trainer told us to, otherwise there was the threat of smashing into the pier as she swam under it….

Finally it was the pièce de résistance, the kiss!!!

It was a truly spectacular afternoon, and the staff at Dolphin Cove were phenomenal. All the Dolphins seemed happy and looked healthy. In fact, they have one rescue dolphin who was hit by a boat, during her recovery (to keep her entertained) they taught her the tricks and skills. Upon her return to health she was returned to the sea, less than a week later she found her way back to Dolphin Cove and “asked” to stay!

I will never forget this day, thanks so much to everyone who made it happen!

Posted by trailingtrekker on January 12, 2014 in Cruise, Uncategorized