Sleeping in a little is always a great treat when you are traveling and I felt nice and relaxed as I got up to pee. The relaxation was sharply ended when I felt pain… even though I had never had one I knew what it was, a UTI (urinary tract infection). This is not a good thing and its not something that goes away by itself. If left alone it will only get worse. Luckily we would be returning to the doc for Buddha this evening so will chat with her then.

I have avoided going to the doctor in Ecuador, Peru, Tonga, Vietnam, Cambodia and many more developing countries, I guess it had to happen sometime. May as well enjoy the day, in between bathroom runs, until the appointment with the doc.

Buddha and I met at our usual breakfast place for brunch, and I chose the killer chocolate cake I had been eyeing every day. It was divine and super rich, could only eat half of it.

Buddha went to hang out with Yogi at the hotel and I went in search of a backpack. I found one that seemed to fit all the things I was hoping for and it had a nice back support. I wasn’t looking for a big one just a day pack type of thing. I got it for around $42 and they threw in a metal water bottle as well. Of course, as so often happens, later when I was trying to pack it and use it, I realised the neat back support also meant it cut down on space and made it awkward to pack. Oh well am sure it will be useful as some point.

A few more errands of running to the bank, the bookstore and then negotiating for a really nice fleece lined jacket I had been looking at all week. He started at 1900 ($23) and I got him down to 1150 ($12). One of my best buys so far I think, just hope its going to be as practical as I am planning.

Then it was off to Monkey Temple for our evening ritual of feeding of the monkeys. Since we were a bit early for our usual feeding time we decided to have a little chow mein at one of the snack shacks. 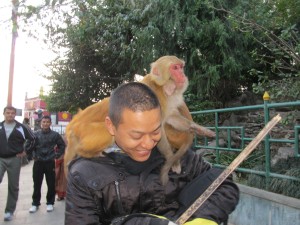 Return to the Doc

Then it was back to the doc for Buddha’s x-ray check. The x-rays turned out to be clear, but there were spots from his previous bout with pneumonia 5yrs before and she was a little concerned about those. I told her that I was pretty certain I had a UTI and what she recommended. She decided to put me on antibiotics and send me for a pee test. We all laughed when we realised Buddha had a URI (upper respiratory) and I had a UTI (urinary tract)… we are like to peas on the opposite side of the pod. She was fantastic and never charged me. We had to return in 2 days for my results. Picking up some antibiotics we headed out to the lab behind the pharmacy.

This is where it got rather amusing. They handed me a sample bottle and pointed me to the bathroom. The problem was that the bottle had a very small opening, not a problem for a guy, but when a girl needs to pee into a bottle and make sure only the urine touches it, it can be a little hit and miss, pun intended. Add to that a UTI that often means you feel the urge but can’t go or it only comes in spurts. Aiming took a lot of concentration. It cost me less than $5 for the test.

To end the day, we met Raj and Yogi and went to go watch “Immortals”. Buddha could tell I wasn’t feeling well and was very sweet, making sure I had everything I needed. The movie was good, not great but good and its always good to have a break and go to a movie.

So with 1 week left in Kathmandu, I am hoping the antibiotics don’t make me any sicker.

Posted by trailingtrekker on May 5, 2012 in Uncategorized