Fernando had got in really late, or rather early this morning, but we still managed to crawl out of bed around 8.30am. We headed over to his parents house to check email and, as usual, she fed us.

The plan for today was to pick up Danny and head out to an archaeological site. The coast of Peru is desert, with very fine sand that gets into everything, but it also means it preserves sites very well.

“Our” sense of direction got a little muddled, we found Avenido Baden Powell but kept turning the wrong way to get to Danny’s house. Eventually we figured it out and picked him up. On the way out of the city Katia called and said she would join, so we parked in the shade and waited for her to catch up in the taxi.

Before long we were speeding out of the city and all its craziness. The cultural site we were headed to is called, Pachacama, or The Sun Temple. It just rises out of the sand and is truly breathtaking. Civilization is encroaching quickly, and there are sure to be further parts of the Sun Temple under these towns. 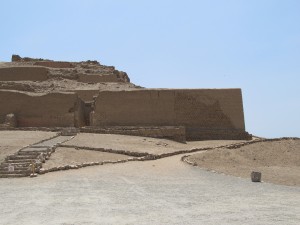 Here is a small blurb about the temple from http://www.labyrinthina.com/pachacamac:

“Pachacamac (pronounced: pah cha kamak) lies 25 miles SE of Lima adjacent to the Pan American highway astride the Pacific coastline. “Pachacámac” in Quechua means “Pacha” world, and “camac” to animate — “The One who Animates the World.” The site was considered one of the most important religious centers of the indigenous peoples of the central Andes, and contains a number of pyramids. Spanish historical records, along with extensive archaeological research, have served to clarify its history and significance. Built centuries before the time of the Incas, Pachacamac is noted for its great pyramidal temples, and for the remains of frescoes adorning its adobe walls. Culturally and chronologically it is related to Chancay, and other centers of the Cuismancu empire, including Huari. At the time of the Spanish conquest it was a major Inca shrine.

According to legend – “in the beginning there were no foods for the first man and the first woman, and the man died of starvation. The Sun then fertilized the woman and she produced an offspring. Pachacámac became jealous of his heir, and killed the offspring, scattering the remains. These became the essential ingredients of humanity: the “teeth of man” were maize, his “bones”, yuca. Artistic images of Pachacamac do not exist, he was considered invisible. However, a wooden staff, thought to be a representation of Pachacamac, was found in 1938 during an excavation of the site. Miguel de Estete writes on the matter, “the Idol makes them [the Incas] understand that it can sink them if they anger it!” Tremors and earthquakes were expressions of his anger.”

After wandering around and exploring we headed out to get some lunch and what a lunch it was. First on the menu was lightly cooked fish in lemon juice with a yellow chilli sauce, then calamari and finishing with a sort of Paella. Delicious. Of course inka cola and beer to join and at the very start a bowl full of something similar to corn nuts, but way tastier. 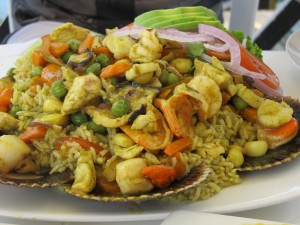 Our final stop was some wetlands that even had some basic environmental education. It turned out to be cheaper, and way more fun, to row around the wetlands vs walking. Unfortunately these boats were not very easy to row and on numerous occasions we ended up in the reeds and hysterics. There were many kinds of birds, including cormorants, ducks, a type of vulture, egrets and many more. Some of the most fun I have had to date.

Before parting ways we stopped in Lima and picked up a kind of fruit shaved ice, I had pineapple and it was delicious. We dropped off Katia and Danny and then stopped by a store to pick up some things and get the car washed. Well we were there I got a long sleeved mens button up shirt, per the biologists, this is vital in the jungle as I can use that over my clothes and spray it with deet (insect repellent) instead of myself.

When we finally made it home we made some dinner (rather Fernando did) and relaxed a bit. Fernando had to go to his folks house as he had a really early morning and needed all his paperwork and such. I spent the evening watching Iron Man 2 and went to bed early..ish.

Stay tuned for my adventures as I take the bus solo, have some bad news on my volunteer work and exploring the Larco museum.

Posted by trailingtrekker on January 23, 2011 in Uncategorized