There are often days on the ship where you just can’t seem to get away and I guess having your world revolve around a floating tin can, it IS very hard to get away. So when you end up getting on an excursion you didn’t really want to go on, escorting excursions is part of the job description, it makes you a little grumpier.

I had hoped, if I had to go on an excursion in Zakynthos, that I would be put on the blue caves of Skinari tour. This would mean a relaxing bus ride up the centre of the island, followed with a ride on a small boat, one of my favorite past times, to explore caves where light reflection causes a huge range of blue hues. Instead I got the tour that included a short walk of the city centre of Zakynthos, a stop in the small village of Volimos and the Anafonitria Monastery. The last thing I felt like doing, in my present grumpy mood, was walking around with a bunch of guests. But that was the tour and there was no option to switch. So, since it’s part of the job, you put your head down, smile and get on with it.

But at least it was a stunning sunrise.

And we got to take the tender boats, aka lifeboats, which always make my day.

For the first couple of cruises I was very confused by the tour name “Zante, Volimos and the Anafonitria Monastery”. We docked in the town of Zakynthos, so where was this mystery Zante… Well it turns out that they are one and the same. Zante is the island’s name according to the Italians. Zalynthos is the Greek name. Well that just made everything clear as mud!

Our guide was Penny, originally from the UK and living in Zakynthos for over 20yrs. We hit it off immediately and while the guests explored the city centre for the allotted 20min we sat down to experience a true Greek coffee. It comes in the form of an espresso shot. But there is a very specific way to drink it. Unlike the Italians, who knock it back like a shot of vodka, and then walk around permanently buzzed. Greek style is way more laid back.

1- Let coffee settle, relax and enjoy the company
2- Do not add milk or sugar, the coffee has an amazing flavor all on it’s own
3- Once settled, sip slowly and talk about life and the weather
4- Near the end when only grounds are left, swirl and turn cup upside down
5- Find an old Greek Lady to read your fortune

I followed 1 through 3, unfortunately there were no old Greek Ladies in the vicinity to have my fortune read. Maybe next time, when there aren’t guests to attend to.

Next stop was the teeny tiny, miss it if you blink town of Volimos. It quite literally runs the length of a short hill. Very quaint with lots of great arts and crafts shops. Now, one of my main aims when ashore is to find something to eat, mainly because after 3.5mths of ship food, variety makes my life very happy. It was still quite early, around 10.30am and we only had 20min in the village, but knowing the next stop was a monastery and then back to the ship, so if I was to hunt down fresh amazing Greek food, this was the stop.

The lady in the restaurant though, was sorry to tell me that there was no way we had enough time for her to prepare me anything as she makes it all fresh and went into great detail of how. So feeling a bit down and watering at the mouth after the delicious description she gave I started looking at the goodies they had for sale. Luckily, Penny had a fantastic idea, why not just get some tzatziki dip and pita bread… sure why not. Well… if heaven was a place in Greece it was on my plate. I have never seen such fresh chunky garlic-ee tzatziki in my life, and the pita bread was so fresh and hot that I could barely pick it up. I was also given a cup of FRESH freshly squeezed OJ and soon became oblivious to my surroundings as I dived right in. Thinking that life couldn’t get much better, I was proved wrong, it can get better, when the owners refused to take payment from me. I was starting to get a real affection for Greek people. I decided to pick up some Greek peanut brittle cookies and then was surprised to receive my bag with a free bar of Olive Oil and Cinnamon soap, “for you a little gift”. I think I want to move here!!! Of course I know, besides the fact that Greeks are known for their hospitality, that all these little things were because I work on the cruise ship and can send people their way… but it was still awfully sweet of them and really made my day.

Our second to last stop was the Anafonitria Monastery in the town of Anafonitria. It is hundreds of years old and has some art in the tiny church that is even older. No photography is allowed inside to protect these beautiful religious paintings, you can however, for a couple of coins, get a candle to light and say a pray or wish. No harm in trying I figured. Walking around the grounds with only my bus load of tourists, the birds and the wind, you could almost feel the stress and anxiety of ship life drain from you. I could have stayed there for hours sipping on Greek coffee and contemplating the meaning of life. Now I understand why so many philosophers were Greek.

On the way out we stopped at a tiny cluster of shops, all interconnected, offering a variety of products from Greece and from the island itself. I decided to pick up a sample of beautiful Greek linen with Olives hand embroidered on it. As is the custom I bargained for the price and got her down to €4, as we chatted I mentioned I would be back in 11 days. She realized I worked on the ship and took my hand, put the money back into it and handed me the linen. She refused to take payment. I was once again taken aback but thanked her profusely. In the next section I was debating between some halva for a friend or some nougat for me, this time a different lady picked up the halva put it in my hands and told me to stay. I wasn’t quite sure why but waited for her. She went into the back and returned a minute later saying it was a gift for me, then she glanced over at the guests heading back to the bus and pulled me over to the table. She got a bag and said “red or white”, placing a bottle of homemade white wine into my bag, then some Greek delights (like Turkish Delights) and then glanced over and grabbed some cherry nougat and threw that in the bag too. I think if she had had more time she would have given me one of every at the stand. I was completely gobbsmacked and sort of wandered off in a daze and into the bus, mumbling to myself how I loved Greek people. Then I had to devise a way to get my wine onboard, otherwise it would confiscated till the end of my contract, as no outside alcohol is permitted on the ship.

Still overwhelmed that the legendary hospitality of the Greeks was indeed true, we arrived at our last stop. A stunning over view of the bay and Zakynthos town, with the MSC Lirica anchored in the bay. Beautiful!! 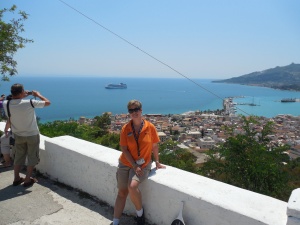 It had become very hot and so I headed to a restaurant in search of something cold or an icecream or the like. I entered and saw the lady on the phone, she told me to wait, that she was just ordering a taxi. I was too tired and hot to argue and looked into the icecream display trying to decide what to get. After a couple of minutes she came over and asked what she could get me, I pointed at a tub of little icecreams on a stick . Within 5seconds I was standing holding 3 of them and having a bottle of cold water pushed into my hands and shown to a chair. She also tried to make me a toasted sandwich, but I had to say no to that, I just felt too guilty. Somewhere in the back of my mind I kept expecting them to hand me over a bill for everything… it just seemed to amazing to be true. When I refused the toasted sandwich she insisted I freshen up in the bathroom. I must have looked really tired.

Returning a Much Happier Person

It has been 2weeks since this tour and I am still in awe at the generosity and kindness I was shown. Again, I realize it is good for their business and indeed I did pass out some cards to folks going on that tour and told others which stores were good to shop at. But they went above and beyond and truly made my week.

After being faced by many complaints and stresses of living and working on a cruise ship, discovering the kindness of folks has a way of making you a much happier person. And who knows, after chatting more with tour guide Penny, maybe I will return next year to volunteer with the turtle protection program, even if it is just to have some more Tzatziki sauce and pita bread!!

And before anyone asks… I claim the 5th when it comes to any information about how to smuggle wine onboard…. 😉

Posted by trailingtrekker on July 20, 2013 in Cruise, Italy, Travel