To Bike Or Not To Bike…

This morning I woke to a wonderful surprise. Apparently during the night Sinterklaas (Saint Nicholas) had visited all of us and left candy in our shoes, even me as the visitor. I can not explain how that made me feel, to be included. Our Sinterklaas doubles as an Opera student and is Cathleen’s roommate.

Cathleen had class this morning and then we were going exploring, so I spent the time catching up on my blog. There had not been very easy internet access in Nepal and so I was quite behind (kind of like now…oops). For lunch I enjoyed another of Germany’s fine bread rolls with amazing cold meats and cheese. I am so in love with country’s for their food.

Upon Cathleen’s return she excitedly told me where we were going to go, then she told me how…by bike. Now, I am ever so slightly ashamed to admit, I cannot ride a bike, in fact I have a serious fear of it. Now this is not because my parents were negligent in providing a bike when I was growing up. I recall a rather nice bike. However, I seem to have never mastered the breaking system. For many years I thought they had given me one without breaks, my brother had handle breaks, what I failed to understand is that mine was designed for younger and less agile children and therefore had back peddle breaks… obviously I was way below less agile. I was terrified of going downhill, and having my brother stand at the bottom of one around age 5 saying “Don’t worry, I’ll catch you” and then promptly running him over, my fear did not abate anytime soon. As I got older many friends tried to teach me, but being of 5ft nothing statue, their bikes were giant and usually involved injury or there about. I could go, it was just the start, stop and balance i had real issues with. (Today I have a 3 wheel bike and love every moment of it, it even has a basket and a bell).

Cathleen ignored my pleas for mercy, insisting that it was an irrational fear and once I got going I would be fine. Her roommates bike was a stylish classic model… whose seat did not lower and was higher than my waist. I was on the verge of tears and shaking as I tried to get some balance and felt like a complete failure as we headed out at a rather fast paced walk. Since it was getting late we had to try do everything double time, the bike would have been much faster (and I would most likely have caused an accident).

It was a wonderful crisp December afternoon and I rather enjoyed the walk. Growing up in South Africa I never really experienced winter and in Oregon on the west coast of the states winters are very wet, so it is a real treat to have a day like this one.

We were heading to a monument commemorating the defeat of Napolean, used as a gathering place for speeches given by Hitler during WW2. However, with it’s 200yr anniversary coming up the place was getting a new lease on life and with a stunning pond in front of it reflecting the image, it made for a great stop. Cathleen enjoys using it as a perfect choice for the hangman word game, VOLKERSCHLACHTDENKMAL… Now if that isn’t a mouthful! 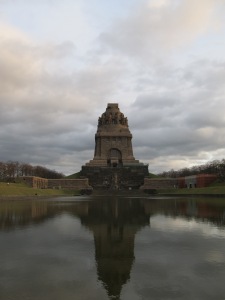 We had planned to go up and see the view and read about the history but the cost was 6 euros, that’s a bratwurst and a mug of gluwein. Cathleen said before it used to be cheaper to just go up for the view, but they policy had changed recently. Instead we headed home stopping at a local store to pick up some sweet goodies, chocolates, licorice, marzipan….. OMG I love this country! 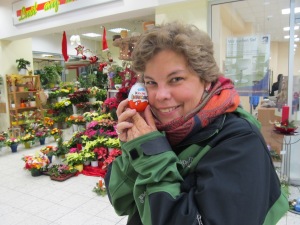 Kinder Eggs Are My Favorite!

We popped out for a quick beer with one of Cathleen’s friends that evening, my first German beer (I had been consuming on Gluwein by the mugful up to this point) and it was delicious.

A Tall Cold One

It was a great way to end the evening! Tomorrow it’s the Leipzig Christmas Market…

Posted by trailingtrekker on August 6, 2012 in Germany, RTW, Travel, Uncategorized

3 responses to “To Bike Or Not To Bike…”