Went into town to enjoy the actual cultural festival, now that I had the right day. It turned out that South Africa was the only country doing a festival or having a hospitality center. I knew there was a reason I loved being South African….American. 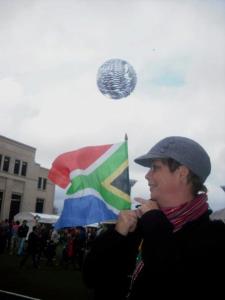 There were numerous tents scattered around showing a host of art, food, treats and biltong!!! The Biltong tent was my first stop and oh boy was it good. There was also a stage with traditional dance and music.

I stopped into the High Comissioner’s tent where they were promoting tourism in SA. As I had time to kill over the next few weeks I offered my help if they needed it.

Emma showed up and I introduced her to biltong and a piece of droewors. 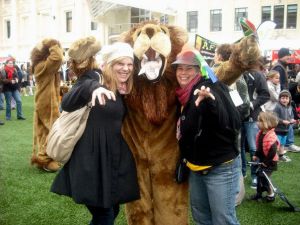 Droewors defined: dried sausage. And just as yummy as biltong. 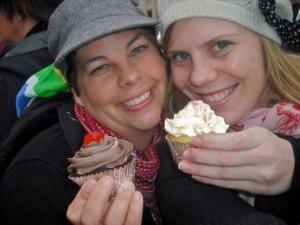 We got given free cupcakes

When Emma’s mom joined us I introduced them to Boerewors. I had hoped they would have pap, but they only had mashed potato. The boerewors was good but had turned a little dry.

Boerewors defined: directly translated to “Farmer’s Sausage”, a type of spiced sausage made with a good helping of coriander seeds.

The crowd at the Cultural Fest was electric and full of Springbok fever. It was an absolute blast and I couldn’t wait for day 2. 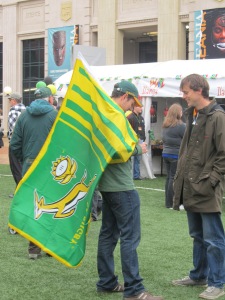 Afterwards Emma and I headed back over to the Ekhaya suite, I was sure that it was for everyone and wanted to check it out with someone. THis time there were far less business men and we were welcomed with open arms. There was free tea and coffee and free drinks. Lunch had just been served so we got some Lamb Curry and rice. The atmosphere was great and very relaxed. I chatted to a tour operator and when he found out I had no ticket for the SA vs Wales game he said he had an extra two and would sell them to me. Woohoo! Off the game I go and it also meant that Emma’s dad would get to go to a game. Robin, tour operator, actually sold me mine for only $50, half price, SWEET AS BRO!

I had come across a posting for a Scottish Ceilidh (dance) that evening on the couchsurfing group page. Emma and I got dolled up, had to rifle through her wardrobe to find something, and then headed out for a great night. It was held by the local Scottish Society and was a hoot. A lot of old timers go there to meet and chat, but there were a few of us who danced. Emma got chosen by “Mr. Rainbowman”, who lets just say was a unique individual. But it was all in good fun. I got a chance to dance twice and the second dance nearly had me collapse, there was a whole lot of twirling and moving and the room was a tad on the warm side. It was fantastic and standing out in the cool night air after felt tremendous.

A fantastic end to a glorious day.

Today was the South Africa vs Wales game and I headed into town to enjoy and even more electric feeling at the Cultural Fest than the day before. You would swear that Wellington had been invaded by South Africans, who apparently all shopped at the same store! It was fantastic, there were vans parked around with supportive slogans and flags, folks dressed in all kinds of team colors and much much more. 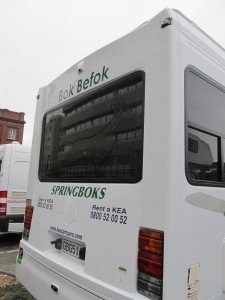 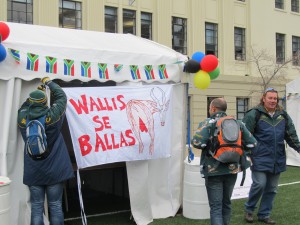 I passed by the High Comissioners tent and Molyne came out to ask if I had got the message about volunteering. Turns out they had called the wrong number but I was more than happy to step in for a few hours. It was actually great fun and I got to chat to a lot of people from around the world interested in South Africa.

Just as Mike showed up Molyne returned. We wandered around the Cultural Fest taking in the sites and sounds and then headed to Ekhaya for lunch. 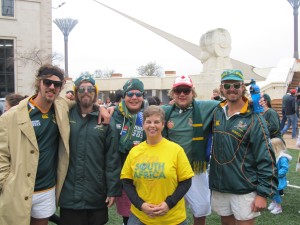 After lunch I picked up my ticket and then had to catch the train home to grab my stuff and drop off the other ticket. I did such a quick turn around that I had the same conductor on the train, much to his bemusement as I was now draped in flags and oozing springbok fever.

Mike, the welshman, and I met at Ekhaya for a drink. It was rather amusing watching the friendly rivalry between the Springboks supporters and Mike. We then headed to grab a pint of cider. As we were waiting to grab something, a couple of Saffers looked at me (barely reaching the bar) and made the comment “Would you like to stand up?”
Ha ha hadee ha. Got to love Saffer humor. 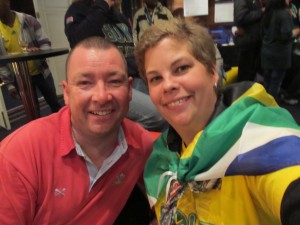 MIke (Wales) and me (South Africa)

As we grabbed a table and watched the game on I noticed someone had face paint to went over to ask if I could get my face painted. In the end I painted 2 guys faces and no one would paint mine. But they gave me the paint and I headed over to have Mike hold a mirror and paint my own. After I had finished, Mike painted the other side. As we basked in the glory of our masterpieces another Saffer walked past and said we had the red and blue on the wrong sides…Bugger 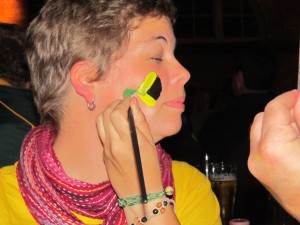 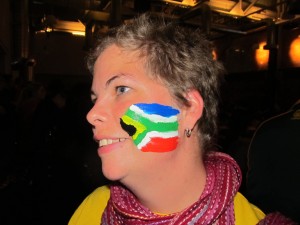 We attempted to remedy it but just made it worse so went and washed it off and started again. Much to Mike’s dismay as I was interrupting his drinking. 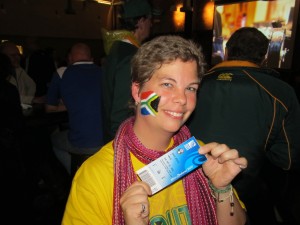 Me and my ticket!

The game was spectacular and very very close. Too close for comfort. Everyone assumed the Springboks would beat the Welsh by 20 points. The final score was 16/17 to South Africa. We just barely scraped through.
The best way to describe the game is through photos, so sit back and enjoy! 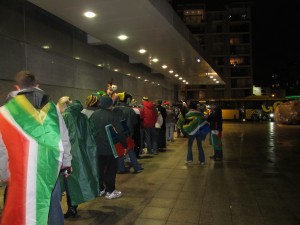 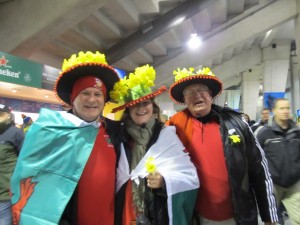 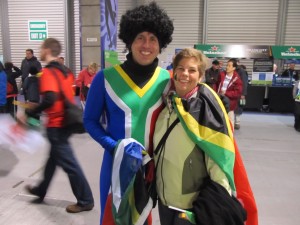 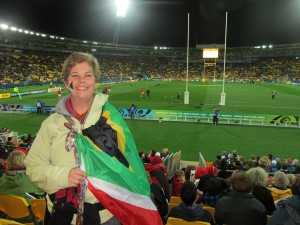 We had great seats 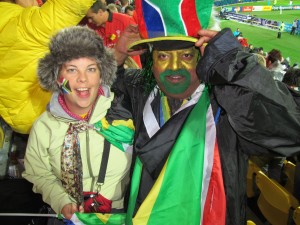 A great time was had by all

It has to be some of the most fun I have had in a long time. And when the South African national Anthem came on, I couldn’t help but shed a tear at the patriotism around me.

Posted by trailingtrekker on September 29, 2011 in Uncategorized

The day after arriving, I pretty much did the following: sleep, movie, sleep! ‘Twas a good day!

Discovering a ‘Home away from Home’

Following my veg out day recovering from the overnight bus trip I headed into Wellington town itself. It was a Friday and I had heard about a South African Cultural Festival in the Civic Center. Hoping to discover some long missed South African delicacies I made my way there with much haste. Only to discover… nothing but sealed up tents. Popping into Tourist Info I was informed that the festival was only over the weekend. However, there was something going on at the Amora Hotel called the “Ekhaya Suite”.

Wandering over that way I discovered a very spiffy looking set up with important looking people. Apparently it was open to everyone, but it seemed way to formal. So I decided to head out and go to the Te Papa Museum and see if I could catch the Springbok team that was making an appearance.

“Ekhaya” means ‘home’ in Zulu. And within a couple of days that is exactly what this place became for me. My home away from home…with biltong

The Te Papa Museum is incredible and I could lost in there for hours. But I headed up to the 4th floor to see the Moari dance performance and hopefully get a chance to meet the team.

The performance was incredible. The group had just returned from touring Europe and I could see why. After a few dances they came into the crowd to let you try poi. These are light balls on short ropes that were traditional used to strengthen wrists, but now are part used in dances by women. It looks a lot easier than it is. I tried and almost tied myself up in knots. We also got the chance to try the haka, which was a great laugh. 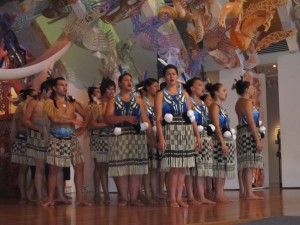 Finally it was time for the Springbok team to take the stage. We all eagerly formed a line, which then turned into 3 and finally into a slow moving mass. But I got to chat with some Irish and a Welsh guy named Mike. It took us almost an hour to get to the front of the line. I had worried that I had nothing for them to sign… well there is always something, but there were children present. But they handed out paper flags and so I was all set as I got to the stage. They are a lot bigger, even sitting down, than you think but full of smiles and even looking a little shy they happily signed and posed for pics. It was 3minutes of meeting compared to 1hr of waiting, but it was worth it. In line the Irish had asked me who was the best one to get a photo with, and I had to admit that I actually had no idea which was which.

Later that night when I called my folks to make my dad jealous over meeting them my dad asked: “Did you meet John Smit?”
“Which one is that?”
“The captain”
“Oh!”
“He was head boy of Pretoria boys high where I went to school”
“Oh!”
“Next time you meet him tell him I went there”
“Ummm ok”.

Who knows I might get to meet them again… 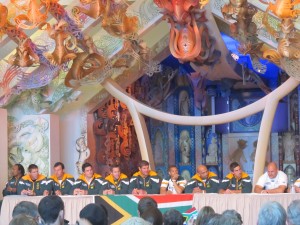 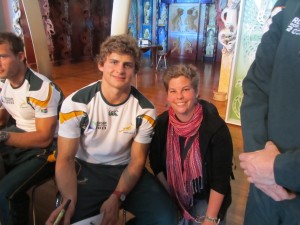 After meeting the team, Mike and I wandered around the museum a bit, did the interactive Haka exhibit and went for a pint of cider.

Friday the 8th September was the much anticipated opening game for the Rugby World Cup, between the New Zealand All Blacks and the Tongan Ikhale Tahi teams. While I waited for everyone to arrive I enjoyed the Ukelele concert and the drumming group.

Emma, her dad and I had planned to watch it in the outside fanzone, but the weather turned cold and so we headed indoors to the town hall. I was concerned about a lack of atmosphere…but fear not, for as soon as the Tongan fans arrived it didn’t matter who was scoring, cause they cheered and sang regardless. By the end of the game you would sworn that Tonga had won by a landslide with the party atmosphere surrounding us. All in all it was a great way to start the world cup!

Posted by trailingtrekker on September 29, 2011 in Uncategorized