A group of us were picked up at 7.45am by our driver Mark and his massive bus like creature. Apparently these creations are needed for the sandy conditions on the island, but this puppy was enormous. I was lucky enough to get the front seat and so had a panoramic view of the tour, definately the best seat in the bus, although also the noisiest as it was near the gear box.

We made a few more stops and were soon chock-a-block full. Then it was off down the road to get the ferry, straight off the beach, to the island. 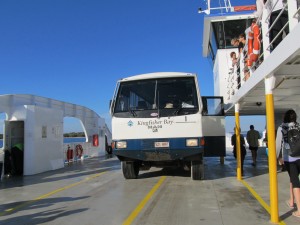 From the ferry we drove directly onto the beach of Fraser, there were no roads or anything of the like and as we drove along we occasionally had the waves wash towards us. At these points driver Mark would let go of the steering wheel and pretend he was swimming or paddling through the incoming waves. 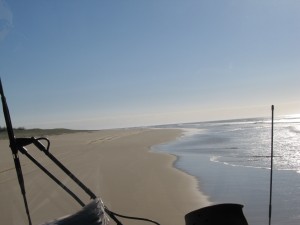 Driving on the beach

The main beach was an endless stretch of smooth sand and the sight was breathtaking. I could just imagine my dad racing along the beach in our “bakkie” (pickup/ute) looking for the best fishing spot. After about half an hour on the beach we turned into the resort for our tea break and then it was off inland and some severe turbulence in the cabin of the bus. 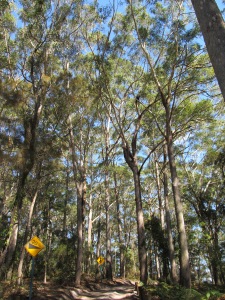 The interior road, this is a smooth bit

We drove past stunning trees, such as Scribbly Pine and Blackbutt Eucolyptus, that seem to go against the idea of an island of sand not being able to support such huge trees with so much diversity. I could feel my headache returning as we pulled into the Lake Mckenzie parking area. There are over 100 freshwater lakes on Fraser Island and are some of the purest in the world. Lake Mackenzie is a perched Lake, which means it is above sea level and the retains it’s water through the compact sand and leaf matter that form a water proof basin. If this basin was destroyed the lake would simply drain away into the sand. 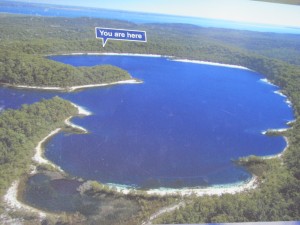 The lake is breathtaking to see and freezing cold too boot, especially in winter. The pureness of the water and the underlying leaf litter at its base reflect the sun and make it seem bluer than it is. 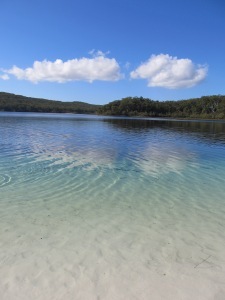 The water was so inviting that I had to go in and was the first person in the group to attempt it. The water was freezing but within a few seconds you were so numb that it actually felt pleasant. The sand is pure silica and was used by the Aboriginal people to shine up jewellery, stones and even their teeth. It makes a great exfolient and I made full use of it, also shining up my rings at the same time. 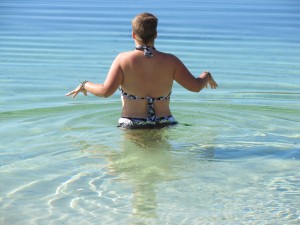 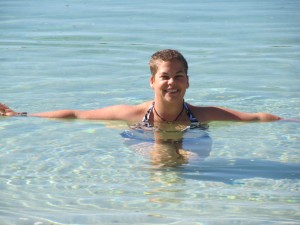 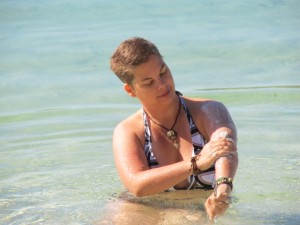 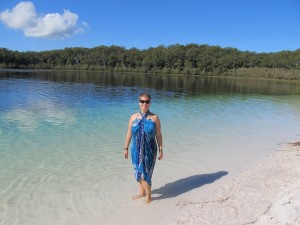 One thing was for, the brisk swim had cured my headache!

We then returned to the bumpy ride and headed deeper into the rainforest and went for a short hike. The ecosystem on the island was truly incredible and I was awestruck at the size of the staghorn ferns (a fern we also have in South Africa). Not only were they prehistoric in size but there were hundreds of them. 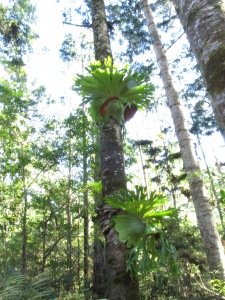 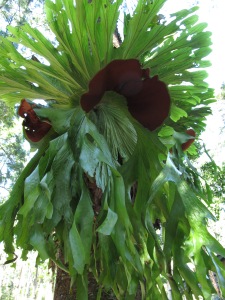 As we wandered through this beautiful old forest Mark told us about all the trees and the river. The river is what is known as a ghost river, as it makes absolutely no noise as it flows through the forest. This is due to the lack pebbles to make it a babbling brook. It is also a sacred location for the Aboriginal people. No male Aboriginals are allowed here as it is where the women would give birth. It was believed that the low pH and cold temperature aided the birthing process.

Leaving the forest we bounced our way back to the resort for a delicious, all-you-can-eat, lunch. Then back up the beach to the wreck of the Maheno, built in 1905, used as a hospital ship during the great war and finally stranded on Fraser Island in 1935, it is now a tourist attraction. The twisted wreck of metal creates quite a stark contrast against the blue sky and crashing waves. 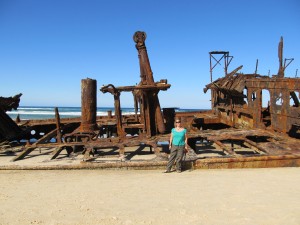 Wreck of the Maheno 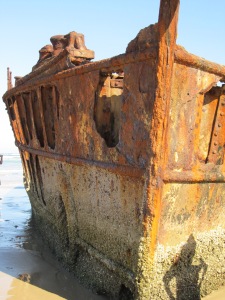 As we returned in the direction of the ferry we came across a wild dingo. There is quite a large population of Dingoes on the island, and with people feeding them there have been a few nasty run-ins. However, we never had any issues with the solitary one we came across and he was in stunning condition. 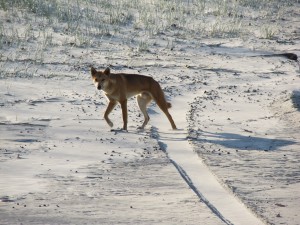 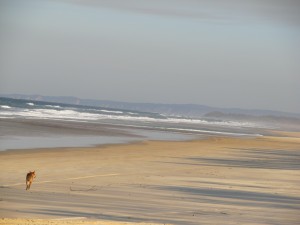 It was a spectacular day with perfect weather. I am very glad I had the chance to explore this location and only wish I had more time (and more money) to explore it more. When I returned to the hostel I discovered my 3 thoughtful roommates had checked out and been replaced by 6 young German lads. The place looked like their bags had exploded and I had to kick things aside to reach the bathroom. Oh well I guess you can’t have it perfect everytime.

Some pics from Fraser: 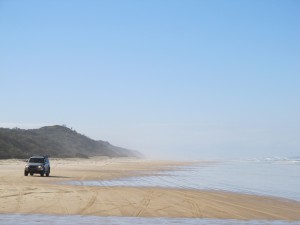 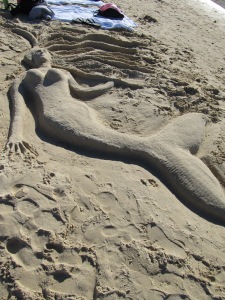 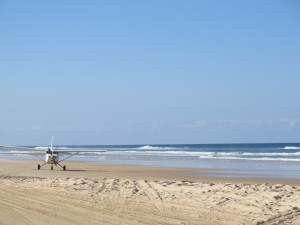 Posted by trailingtrekker on July 23, 2011 in Uncategorized