Cusco Day 8 – So This is Altitude!

Woke up constantly through the night checking the time. I never sleep well before a trip and this one was no exception. When the alarm finally did go off and I dragged myself out of bed I discovered that Fernando had apparently bounded out of bed and was literally giddy with excitement. He said it was because I was going to go to Cusco and Machu Picchu, but it might have been that he would have the place to himself (At least till his sister arrived in a day or 2). So well I searched for coffee, I also tried to comprehend the list of suggestions and tips that he was spouting at me, not an easy task let me tell you.

Tips for Altitude Sickness
– eat light (pasta or vegetables, no heavy red meat)
– eat carbohydrates (bread and pasta)
– chew coca leaves (place in mouth and pull main vein out)
– drink coca tea
– drink LOTS of water
– pace yourself, don’t do too much at one time (fine with me)
– practice taking deep breaths and holding them to get O2 to your lungs
– eat candy (again fine with me)
– try to avoid chocolate (boo) but if you feel depressed then it is good to have some (well I am sure I can figure that one out 😉 )

Awaiting my Chariot
All too soon the taxi arrived and I headed out to explore part of Peru on my lonesome. Thank heavens for WiFi at Lima airport and all it wasn’t long before it was time to board. In the meantime I had met an American couple that were heading to Machu Picchu that evening and then after a day or two there heading to Quito, Ecuador with a 16hr layover (planned) to explore and then off to the Galapagos Islands. It seemed fairly crazy to me to just bounce around seeing all the sights but not getting a feel for the place. I can just imagine them sitting with a checklist ticking as much off as possible in as little time as possible. Just crazy I tell ya. And I really hope they don’t suffer from the altitude otherwise their plans could be up in smoke.

And Then it Hit Me
When we landed I decided to take it easy and not rush to get off the plane. I was wondering why half the plane had the same idea until I realised they were staying on for a further leg of a trip, very nearly didn’t get off the plane. As I walked off the plane I immediately felt unsteady and a tightness in my chest. I am sure some of the staff thought I was drunk as it seems that it was exceptionally easy to be thrown off balance. Its crazy to think I could be affected so quickly.

My taxi from the hostel hadn’t arrived yet, so I stood and kept shoeing potential taxi drivers away in between trying to take deep breaths without hyperventilating.

Flying Dog Hostel
Finally it arrived and speeded on its way to the hostel. A tiny place at the top of a slight hill (although at altitude it felt like a 90degree slope), with only 23 beds, a spiral staircase, comfy couches, DVDs and a big screen tv. I was in the dorm room and grabbed the bed by the little balcony. The beds were the most comfortable I believe I have every had in a hostel before and I immediately took a nap. 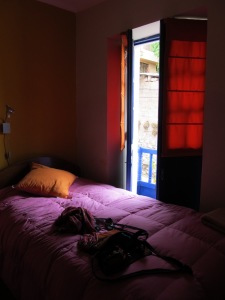 Dinner at Nuna Raymi’s
Around 5pm I crawled out of bed, feeling like I had had a major party the night before. Its not fair to be hungover without the fun. I figured I should attempt to find dinner and perhaps walk around. Promptly got lost trying to find the recommended location. Apparently another side effect, for me at least, of Altitude Sickness, is the single minded drive to find said location, I considered the option of going somewhere else, but only briefly, I wanted to find Nuna Raymi’s, end of story. After wandering up and down the same street for what seemed like ages I realised I had walked past it numerous times. there was no one else there but the staff were very nice and seemed to speak limited English. Still I managed to order a plate of pasta with olive oil, fresh tomatoes and Andean cheese. When it arrived it was delicious and I ate it with as much gusto as I could manage. 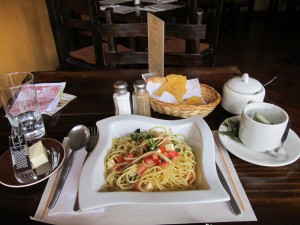 Round about then a large tour group arrived, and the leader announced that the head waiter (my Spanish speaking waiter) would tell them more about the menu. Out of no where he suddenly discovered the gift of English and could describe the dishes quite well. And yet when he returned to me he fell back into Spanish. It was all rather amusing. Someone in the group ordered Cuy, roasted guinea pig, it is considered a delicacy in Peru. They brought it out for pictures then took it in the back to cut it up.
For those with sensitive consitutions please beware 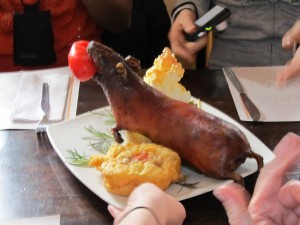 After dinner I headed back to the hostel and just vegged, I felt like I had run a marathon, was recovering from pneumonia and had a hangover all at the same time. Not a happy feeling on any given day. I had a headache, short of breath and general exhaustion. So a movie and bed seemed like a fantastic idea.

Stay tuned as I continue to battle to breathe and meet a couple of Brits to hang out with.

Posted by trailingtrekker on January 25, 2011 in RTW, Travel, Uncategorized